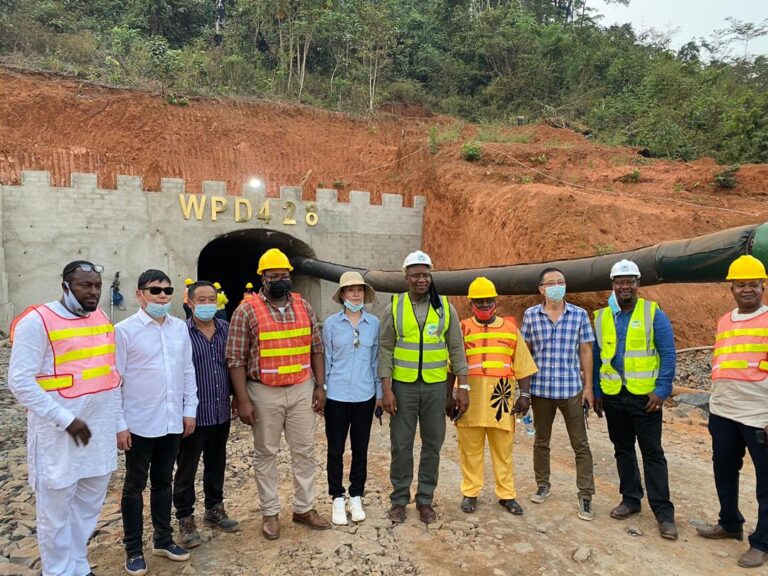 The Minister of Mines and Mineral Resources, Musa Timothy Kabbah, on 3rd February 2021, launched the Komahun Gold Processing Plant, in Nimikoro chiefdom, Kono district, as part of the ceremony marking the start of full-scale gold mining and processing operations by Wongor Investment Mining Company. The plant, which happens to be the biggest gold processing plant ever to be operated in the country, symbolizes a transition from the predominantly illicit artisanal mining of gold in Nimikoro chiefdom, to an industrialized, well regulated, large-scale mining operation that will benefit the country and its people.

Welcoming participants to the ceremony, host Paramount Chief of Nimikoro chiefdom, Aiah Denton Bona Foamansa III, and the Chiefdom Speaker of Nimiyama chiefdom, Philip Koroma, maintained that they were excited to have such a large-scale gold mining operation in their chiefdoms, as it would not only increase revenue for Government, but will also bring benefits to the local community. They informed the gathering that Wongor Investment and Mining Corporation has already proved to be a good corporate citizen, as they have met all their statutory and other obligations to the community, including the prompt payment of surface rent, the signing of a Community Development Agreement with the host community, and provision of assistance under CSR. The above, they noted, was testament to the fact that the operations of a recognized and legal entity, such as Wongor Limited, brings benefits to the community, unlike illegal mining, which only benefits few individuals. They both assured the Minister and his delegation that Wongor was welcome to operate in their chiefdoms. In his keynote address, the Minister of Mines and Mineral Resources, Musa Timothy Kabba, stated that he was honoured to be launching the largest ever industrial gold mining operation in the country, noting that the aim of the current Government, under the dynamic leadership of Rtd. Brigadier Dr Julius Maada Bio, is to attract credible investors into the minerals sector. He lamented the fact that after over ninety years of mining in Sierra Leone, the country as a whole, and the mining communities in particular, have nothing to show in terms of development. This, he said, warranted the transformative measures that Government, through the Ministry of Mines and Mineral Resources (MMMR) and the National Minerals Agency (NMA), is pursuing to ensure that the country and its people benefit from the mineral wealth. He explained that, under his leadership as Minister of Mines and Mineral Resources, the MMMR and the NMA are reviewing the Mines and Minerals Act of 2009 and the NMA Act of 2012 to improve on the governance and management of the minerals sector, maximise benefits for the country and improve on mining contribution to local development. Notable changes that would benefit the community, he went on, are the proposals for 70% of surface rent to go directly to land owners, and for mining companies’ contribution to the Community Development Fund to be increased from 0.01% to 2.5%. Minister Kabba assured the people of Government’s commitment to reversing the resource curse, and ensuring that the mineral wealth of the country benefits its people.

Earlier in his statement, the Director General of the NMA, Julius Mattai, noted that the launch of the processing plant, at this time, by Wongor Limited, which acquired its licences just before the outbreak of the COVID 19 pandemic, is a strong indication of the resilience of the company. He noted that these are the types of investors that Government wants to attract to the country; credible investors who can withstand shocks, not the fly-by-night investors who will disappear after the slightest challenge. He welcomed the news that Wongor was supporting the local community, and encouraged them to respect the rights, customs and traditions of the local people. He assured the company that, as a regulator, the NMA will continue to work with them, and ensure that they “do the right things right” so that the mining would be done in a responsible and sustainable manner, and would benefit the country, the local community and the company.

Other speakers included the Member of Parliament for Constituency 023, Hon. Musa Fofanah, who is also a Member of the Parliamentary Committee on Mineral Resources, and the Chairman of Kono District Council, Sahr Solomon Gbondo, both of whom expressed delight over the launch of the processing plant and the operations of the company, noting that it marks another chapter in the history of the constituency, the district and mining in the country. They acknowledged that the granting of the large-scale mining licence to Wongor for them to mine gold in Komahun was a step in the right direction, as it puts an end to illicit mining, which brings no benefits to Government or the community.

The ceremony, which attracted stakeholders from the district and Government regulatory agencies, climaxed with a tour of the processing plant by the Minister and his delegation, and the production of the first gold ore from the plant.

No comments to show.